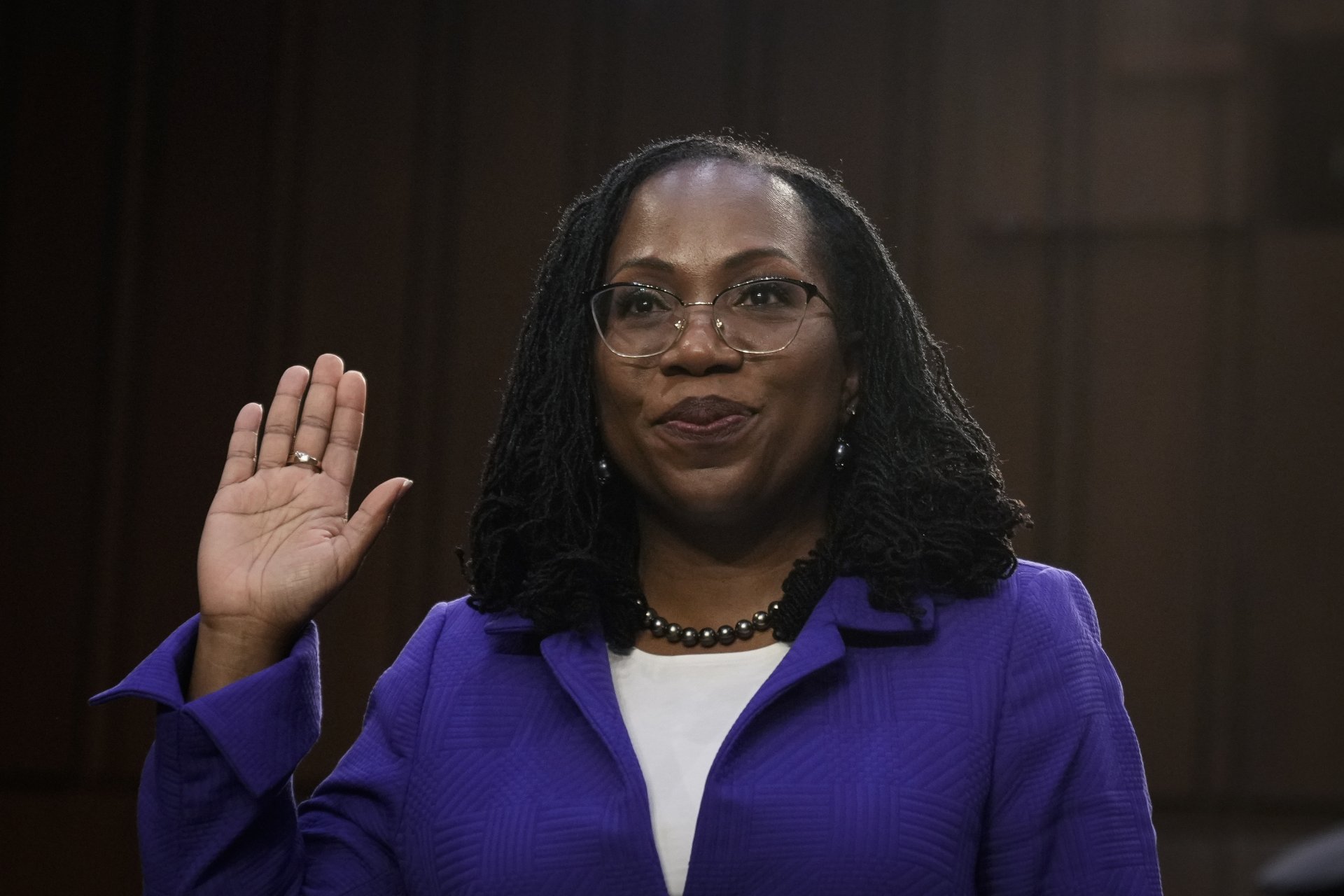 Ketanji Brown Jackson was sworn in on Thursday as the newest Supreme Court justice — becoming the first Black woman ever to serve on the high court.

Her husband, Dr. Patrick Jackson, held the Bible as the oaths were administered.

Breyer informed President Biden on Wednesday that his retirement would take effect Thursday at noon ET after the court issued its last two opinions before taking a summer recess. The court’s next term begins on Oct. 3.

Jackson’s addition to the bench will not change the ideological alignment of the court, which remains 6-3 in favor of conservatives appointed by Republican presidents.

She joins as the Supreme Court reaches a record low in public confidence after a number of unpopular decisions, including the stripping of reproductive rights from millions of Americans.

Biden selected Jackson to fill Breyer’s seat in February, and she was confirmed by the Senate in April with the support of all 50 members of the Democratic caucus and three Republicans.

She becomes the 116th justice and first federal public defender in the court’s history, fulfilling Biden’s campaign promise of appointing a Black woman to the Supreme Court.

Jackson is the third Black person to serve on the court, following Thurgood Marshall and Clarence Thomas, now the court’s oldest member after Breyer’s retirement. She is the sixth woman to serve, and this is the first time four women have served together, with Jackson joining Sonia Sotomayor, Elena Kagan and Amy Coney Barrett on the current bench.

During her March confirmation hearings in front of the Senate Judiciary Committee, Jackson discussed what her being in that position meant, saying, “My parents taught me that unlike the many barriers that they had to face growing up, my path was clearer, so that if I worked hard and believed in myself, in America I could do anything or be anything I wanted to be.

“When I was born here in Washington, my parents were public school teachers, and to express both pride in their heritage and hope for the future, they gave me an African name: Ketanji Onyika, which they were told means ‘lovely one,’” she continued.

Jackson was supported at the hearings by her husband and two daughters, to whom she said, “Girls, I know it has not been easy as I’ve tried to navigate the challenges of juggling my career and motherhood. I fully admit I did not always get the balance right, but I hope that you’ve seen with hard work, determination and love, it can be done.” 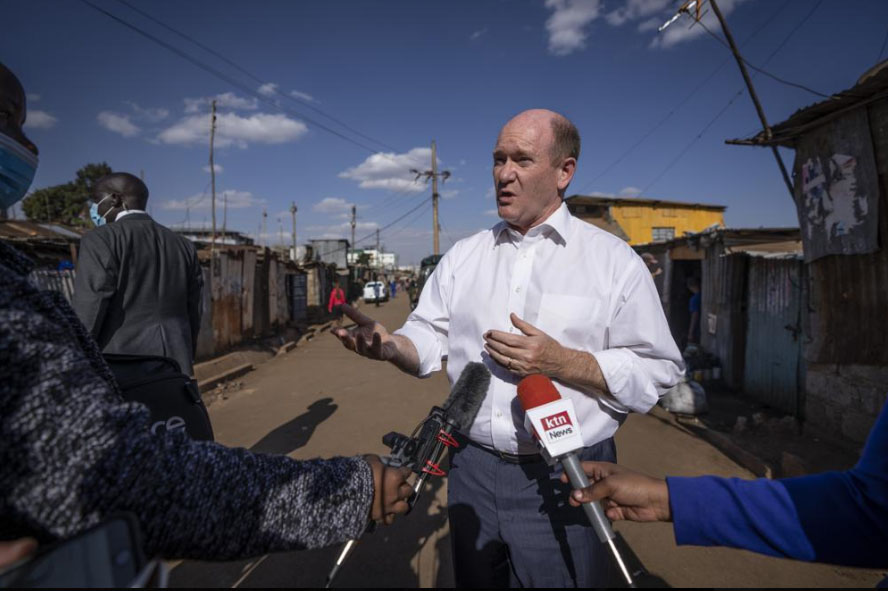 NAIROBI, Kenya (AP) — A visiting U.S. senator says he has encouraged Kenya’s outgoing president to participate in a “peaceful transition of power” amid the latest election crisis in East Africa’s most stable democracy.

“I’ll let the president speak for himself, but that was certainly a hope I expressed today,” Sen. Chris Coons told The Associated Press after his meeting with President Uhuru Kenyatta on Thursday. He said they discussed ways in which Kenyatta can play a “constructive peacemaking role” after leaving office.

Kenyatta has remained publicly silent since the Aug. 9 vote, adding to the anxiety as Kenya again faces post-election uncertainty and a likely court challenge by the losing candidate, Raila Odinga. Coons, leading a congressional delegation on a five-country Africa visit, was in Kenya in part to meet the key parties and urge that calm continue.

Kenyatta had backed longtime rival and opposition leader Odinga in the close race against his own deputy president, William Ruto, who fell out bitterly with Kenyatta years ago. Ruto on Monday was declared the winner, but not before Kenya’s most peaceful election ever slid into chaos in the final moments.

The electoral commission split in two, each side accusing the other of trying to tinker with the results. It came as a shock to many Kenyans after an election widely seen as the country’s most transparent ever, with results from the more than 46,000 polling stations posted online.

Now Odinga almost certainly will challenge the results in Supreme Court. His campaign has seven days from Monday’s declaration to do so, and the court will have 14 days to rule. Odinga has urged supporters to remain patient instead of taking to the streets in a country with a history of sometimes deadly post-election violence.

After meeting with Kenyatta, Odinga and Ruto, Coons told the AP “I was encouraged that in all three meetings we heard a commitment to a call for calm and tranquility, to respect the legal processes established in the 2010 constitution.” He said the conversations were about the rule of law, the importance of free and fair elections and peaceful transitions.

“Obviously, the United States has had a very difficult experience with these issues for the past few years,” Coons said, referring to the Jan. 6, 2021, attack on the U.S. Capitol as former President Donald Trump tried to remain in power. “I said in all three meetings we have things to learn from Kenya.”

Kenyatta told Coons that Kenya would uphold “its position of a shining example of democracy in the continent by maintaining peace during this transition period,” according to a statement issued by the president’s office.

Coons said he did not come to Kenya seeking anything like the handshake that Kenyatta and Odinga, after prodding, famously shared to end months of crisis after the 2017 election, whose results were overturned by the Supreme Court over irregularities, a first in Africa. Odinga boycotted the fresh vote and declared himself the “people’s president,” bringing allegations of treason.

This time, with Kenyatta’s backing, the Odinga campaign felt he would win the presidency after a quarter-century of pursuing it.

Kenyatta is stepping down after two terms, itself a notable act in a region where longtime presidents like Yoweri Museveni of Uganda and Paul Kagame of Rwanda have been accused of clinging to power through changes in term limits, manipulation of elections and crackdowns on dissenting voices.

The U.S. delegation is also visiting Rwanda, where human rights and violent tensions with neighboring Congo are almost certainly on the agenda following Secretary of State Antony Blinken’s visit there last week. Coons said he looks forward to visiting again with Kagame.

Kenyatta has played a leading role in efforts to calm the Rwanda-Congo tensions and in trying to mediate in neighboring Ethiopia’s deadly Tigray conflict, with support from the U.S. Coons did not say what kind of peacemaking role he hoped to see Kenyatta play after stepping down.

Ruto’s public comments this week have been on domestic matters, not foreign, but Coons said the president-elect made an “expression of concern and intent in trying to help lead to positive resolutions” in such regional crises.

Coons also has played a role in trying to calm the Ethiopia conflict. But he told the AP the delegation was not having a meeting with Ethiopia’s government or the Tigray forces while in Kenya.

Coons, a member of the Senate Committee on Foreign Relations, and his delegation have already visited Cape Verde and Mozambique and will visit Tunisia as well.

Mother Nature never ceases to amaze. Judith Nowokocha, a photographer from Calgary, Canada, received one such surprise. In 2016 she gave birth to twins and was in utter disbelief. The reason was that one of her babies was black and the other an albino.

The different skin tones left her confused as she felt that the hospital staff did a mix-up.

The brown baby boy Kamsi and the Albino baby girl Kachi became an Internet sensation as soon as their mom uploaded their pictures on the internet. She was in shock and felt sure that the wrong baby was handed to her, but all she heard was congratulations.

The girl was diagnosed with a rare case of Albinism. Judith was apprehensive about how society would see the twins, but she has never received any negative reactions. She had heard superstitions about albino babies in Nigeria, but counseling was of great help to her. Her daughter does get bullied sometimes, but the love she receives is much greater. She teaches her daughter to embrace her differences.

The kids have been receiving a lot of attention for their unique appearance, but their mom says that they are just regular kids who are extremely protective of each other and each other’s best friends. They get along like a house on fire. Judith struggled to get pregnant for eight years, after which she delivered these twins through a successful IVF.

Kachi is diagnosed with Oculocutaneous Albinism (OCA), a condition in which the body produces an insufficient amount of melanin. It affects the eyes, skin, and hair. One in four children has the risk of this condition when both parents carry the Albinism gene. The doctors had told her that the girl would struggle with her vision. So she sees an eye specialist every six months. 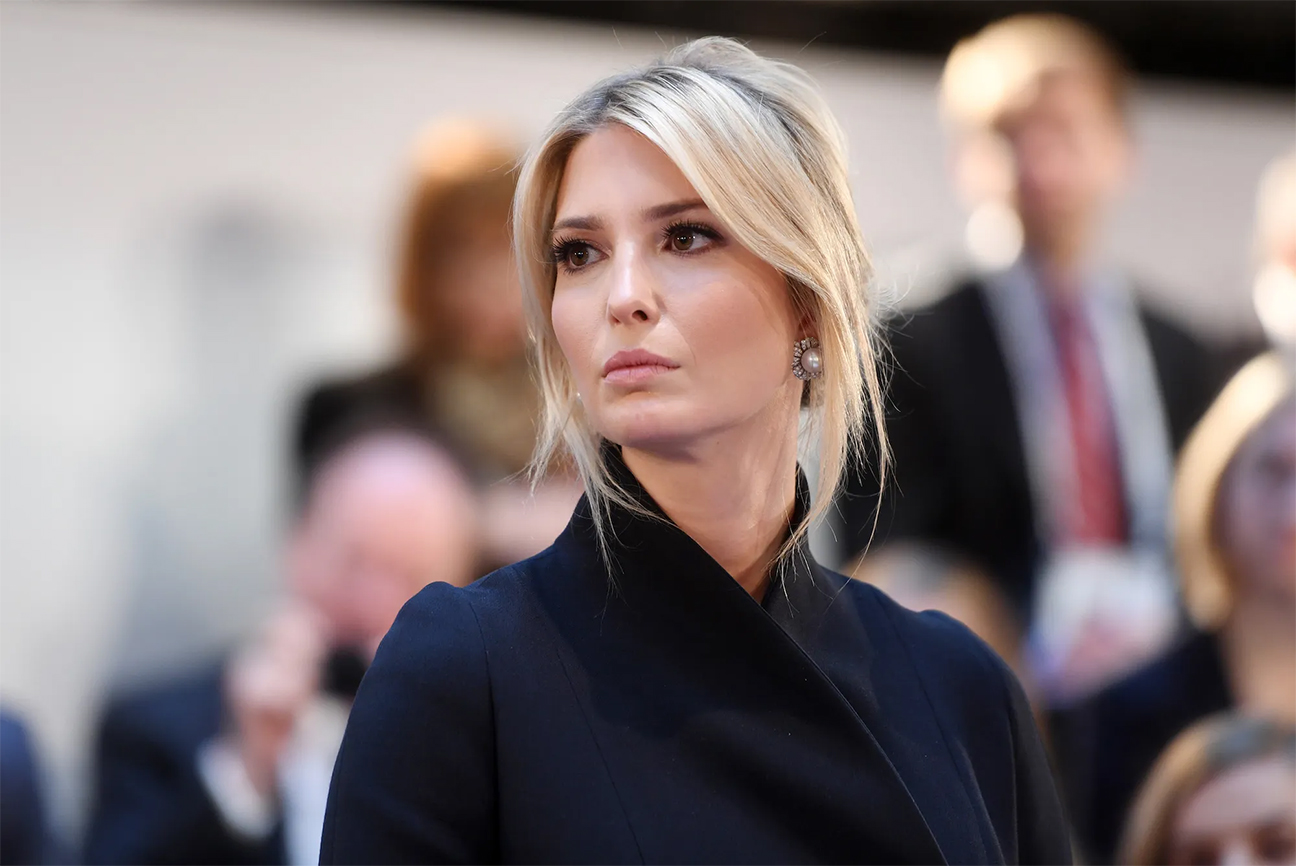 Ivanka Trump ‘Dumps’ Brothers Donald Jr. & Eric As She ‘Doesn’t Want To Be Part Of The Family Business Anymore’

It looks like Ivanka Trump is moving on: the businesswoman was never close with her brothers, Donald Jr. and Eric, and now she wants to focus on the future — without them.

“Ivanka has basically dumped her brothers,” a source exclusively tells OK!. “She doesn’t want to be part of the family business anymore or even the controversial family. Her future is with her husband, Jared Kushner, and her kids. They are out of politics and won’t be campaigning with her father anymore or defending him on TV.”

The insider reveals that Eric is upset with his sister, while Donald Jr. isn’t sweating it, as more attention will be on him going forward.

“Ivanka was always their dad’s favorite. With her out of the picture it is his time to shine,” adds a friend.

As OK! previously reported, Ivanka and Melania Trump hope that Donald Trump doesn’t run for president in 2024 — especially because he is embroiled in many legal battles at the moment.

“They are a family divided,” a source told Radar, adding that Melania wants her hubby to stay away from Washington, D.C., as she believes it will “make all of the family’s legal problems go away.”

In early August, Donald’s Mar-a-Lago home was raided, as the FBI believes he took documents from the White House that are classified.

“It’s obvious all of this craziness is happening because some people are scared Donald is going to run again in 2024,” the source stated. “Melania and Ivanka do not get along about much, but both are begging him to announce he will not be running. They believe all of this will disappear if he ends all of the speculation.”

The insider said that the investigation isn’t “just affecting Donald, it affects the entire family,” the source said. “Melania and Ivanka are sick of the endless investigations and attention. They want to go back to their fabulous lives. They just want this all to end.”